SaaS vs Cloud: What is the Difference?

SaaS vs Cloud Computing is often used interchangeably. Even though they are linked and have a lot in common, there are significant differences between the two approaches.

Cloud computing has been characterized by the National Institute of Standards and Technology as “on-demand network access to a shared pool of customizable computer resources that may be promptly granted and released with no administrative effort or service provider engagement.”

To improve the user experience, cloud products can collect large amounts of anonymized data and use this information within algorithmic Software to enhance the user experience; for example, by making their cars drive more safely, recommending new music, or assisting you in determining the root cause of a network issue (LogicMonitor, humble brag). The advent of SaaS-based solutions is helping to usher in this new age.

When it comes to Software that isn’t stored on your premises, SaaS refers to it as a service rather than a product. Instead of being a part of another software, it is a separate application.

This is hosted in the provider’s data center instead of an on-premise solution that would employ servers and storage in your own data center.

The SaaS application’s fees are included in the monthly subscription charge, eliminating the need to acquire and install equipment and then pay for software maintenance.

However, Cloud Computer provides computer resources not bound to a specific location. The infrastructure and services cover everything from virtual machines and servers to data storage, communications and messaging, network bandwidth, and development environments.

Concerning the debate between SaaS vs cloud computing, Developers, application providers, experienced computer users, and corporate IT departments may rent equipment and services in the Cloud rather than the general public.

Your servers must be accessible for Cloud Computing to function correctly. Whether or not your SaaS applications were built using Cloud services is immaterial; the infrastructure that supports them may have been.

When we talk about SaaS vs Cloud, it was a ‘time-sharing system’ back in the 1960s when SaaS first appeared. Many “dumb” terminals without CPUs were linked to a mainframe or minicomputer to offer centralized hosting for commercial applications.

Employees were permitted to use their PCs to run applications, but the company’s central server was still storing the most critical information. SaaS has regained its attractiveness because of a reduction in bandwidth costs. 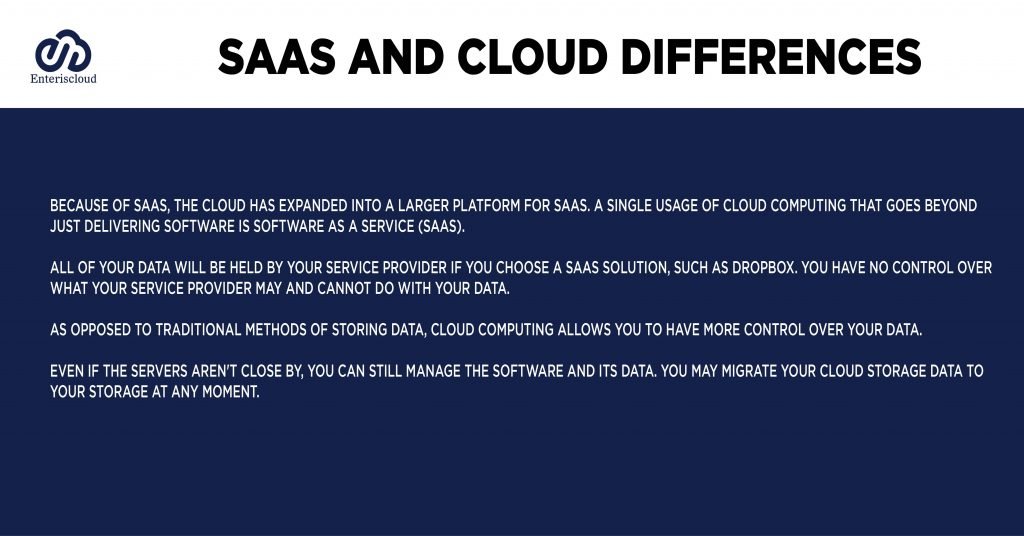 Because of SaaS, the Cloud has expanded into a larger platform for SaaS. A single usage of Cloud Computing that goes beyond just delivering Software is Software as a Service (SaaS).

As opposed to traditional methods of storing data, cloud computing allows you to have more control over your data.

Even if the servers aren’t close by, you can still manage the Software and its data. You may migrate your cloud storage data to your storage at any moment.

High-value apps will likely be moved to the Cloud by Cloud software, while SaaS is projected to continue dealing with free or low-cost apps and services.

Cloud computing differs from SaaS because it is hosted on a customer-owned server, while SaaS requires a third-party host. Your data may be used in any way the service provider deems fit without your consent.

Data ownership and security benefits outweigh the negatives in most cases when using SaaS. SaaS applications need a user to first log into their vendor’s website.

Even though SaaS applications are hosted “on the cloud,” the Cloud is not synonymous with SaaS itself. For example, a free email service processes and keeps our data for us.

Most of us will continue using the service even if we don’t know about the company’s privacy policies. Your data may be more easily managed on the Cloud.

While the servers themselves may not be in the same place, data and Software may be backed up and saved on the Cloud. The data is yours after it leaves the Cloud, just as with a traditional on-premises server farm.

SaaS vs Cloud Computing is a never-ending discussion. I hope you understand that cloud software solutions are often the most crucial choice for small enterprises looking for low-cost solutions. Cloud computing makes more sense for larger firms with more in-house capabilities and a need or desire to have more control over sensitive data.

These organizations can also afford the infrastructure expenditures readily. In other words, as the Cloud’s capabilities grow, so does its complexity. There may be a separation between on-premises and cloud-based infrastructure, platforms, and services.